This exhibition of the work of Joan Casals is structured into various sections which aim to provide both an overview and a specific view of the creative career of the artist.

During the eighties, Casals incorporated within his language some specific calligraphies, a form of illegible texts which refer to gestural expression and the aesthetic of writing, rather than content or meanings. During this period, his works are also characterised by the choice of slate as a support.
In his paintings of the late eighties and early nineties, the search for his own iconography and a more personal language and technique becomes more evident. The works are grouped into series of very diverse sizes and formats, for example the works entitled Vestigis (Vestiges), Memòria del temps (Memory of time) and Àmbits (Ambits).

His more characteristic style begins to define itself in the late eighties. It is from this moment that the technique becomes more sensual and more subtle, the iconographic repertoire increasingly varied, while the content leans towards images from the memory. One of the themes and motifs he frequents most is the labyrinth, a metaphorical image which gives rise to all kinds of interpretations, meanings, symbolisms and connotations.

The iconography of the mature language of Casals predominantly enters the memory of a time and a country that he has experienced. References to the human body appear everywhere, as do those of various animals. There is also a series of icons which allude to political or religious symbols, and others which we could relate to various everyday objects. Everything is peppered with numbers and letters, and with inscriptions, words and sentences, written and painted in the Greek alphabet, which refer to the classics, to psychoanalytical ideas and concepts or to popular sayings.

Viewing these works we realise that the artist is on a quest for the vestiges, memories, images, icons and symbols of our personal and collective memory or, if you wish, of the (lack of) memory of times past.

This is, therefore, a work which attempts to fight against oblivion. A work which places art at the centre of the human labyrinth.

Tarragona's Part Alta was the landscape of his childhood, adolescence and early youth. The Art School-Studio became his intellectual refuge and the place of his artistic training. Through the specialism of Ceramics and considerable baggage in other disciplines, he embarks on an initial creative career that would evolve.

Sharing his life with Dolors Escardó leads him to Reus, where he quickly integrates and will search the ins and outs of his ideological and artistic concerns. We find it in the creative project of the Art School-Studio of Reus and in the group of artists who, under the shelter of the Reading Centre, make the city a centre of innovative and avant-garde artistic creation.

The exhibition "Artistes de Reus", programmed by the Culture Ministry of the Government of Catalonia in 1984, signifies the recognition of the creative vitality of a nucleus of artists who work in the capital of the Baix Camp region. In a continuous quest for artistic languages, he goes from Cal·ligrafies (Calligraphies) to Codificacions (Codifications), develops the Vestigis (Vestiges) series and with the quadriptych Memòria del temps (Memory of time) wins the prestigious Tapiró award (1989). He embarks on a personal career in which, with a painstaking technique, he expresses his artistic quality and the most intimate concepts within the memory's inexhaustible well of images and sentiments.

The role of educator is an inseparable part of his career.  Involved in the "La plàstica a l'escola" (Art at school) course, the classrooms of La Salle-Reus and various schools in El Priorat, Tarragona and Salou were the venues of his teaching activity. A task which he exercised with passion, method and collective reflection.

His creative work is conceived with conviction and freedom, far removed from the speed of the commercial circuits that impose a consumer-driven pace. "I draw and paint in a very intimate way, without haste, or pressures of any kind, and instead develop my own discourse", the artist declared.

The magna exhibition "L'art del segle XX a les comarques de Tarragona", put together by Antonio Salcedo, showcased the artistic activity in this region during said century, covering the artists and assessing the institutions that had stimulated art and given shelter to the artists. It was an exhibition of a statement nature. Joan Casals was present in it with a polyptych of 72 pieces.
In 2005, Joan Casals reconnected with the public of Reus, when his work received the Acquisition award given out by the Municipal Institute of Museums. The exhibition "Dipòsits de la memòria" (Deposits of memory) demonstrated the solidity of recent works, impregnated with a poetry of personal language, constructed on the basis of memory inhabited by spaces of light and rooms of shadows, imagination and reality.

His heart failed him when he was experiencing a plethoric moment, personally and artistically.  It was very sudden and he closed his eyes forever on 16 October 2011. Eyes with an attentive, essential and profound gaze that took in the nearby and most global surroundings, which he also considered his own. Extremely vivid eyes that made it evident to the interlocutor that the words that came to him were the centre, the most important during the moment of the conversation. When you spoke to Joan Casals you were certain that he was listening to you, that he understood you, that he comprehended you, three of the most pleasing sensations of human communication. 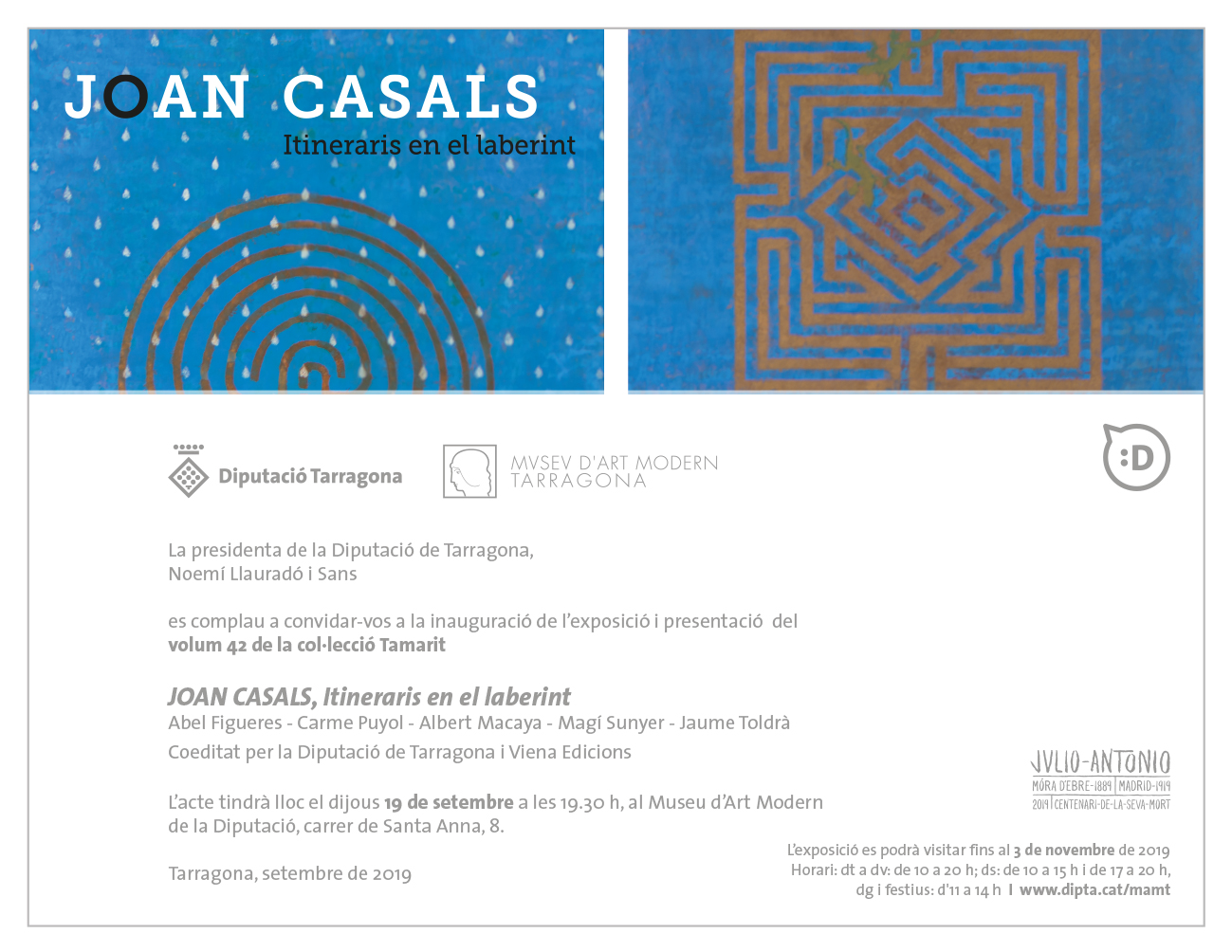 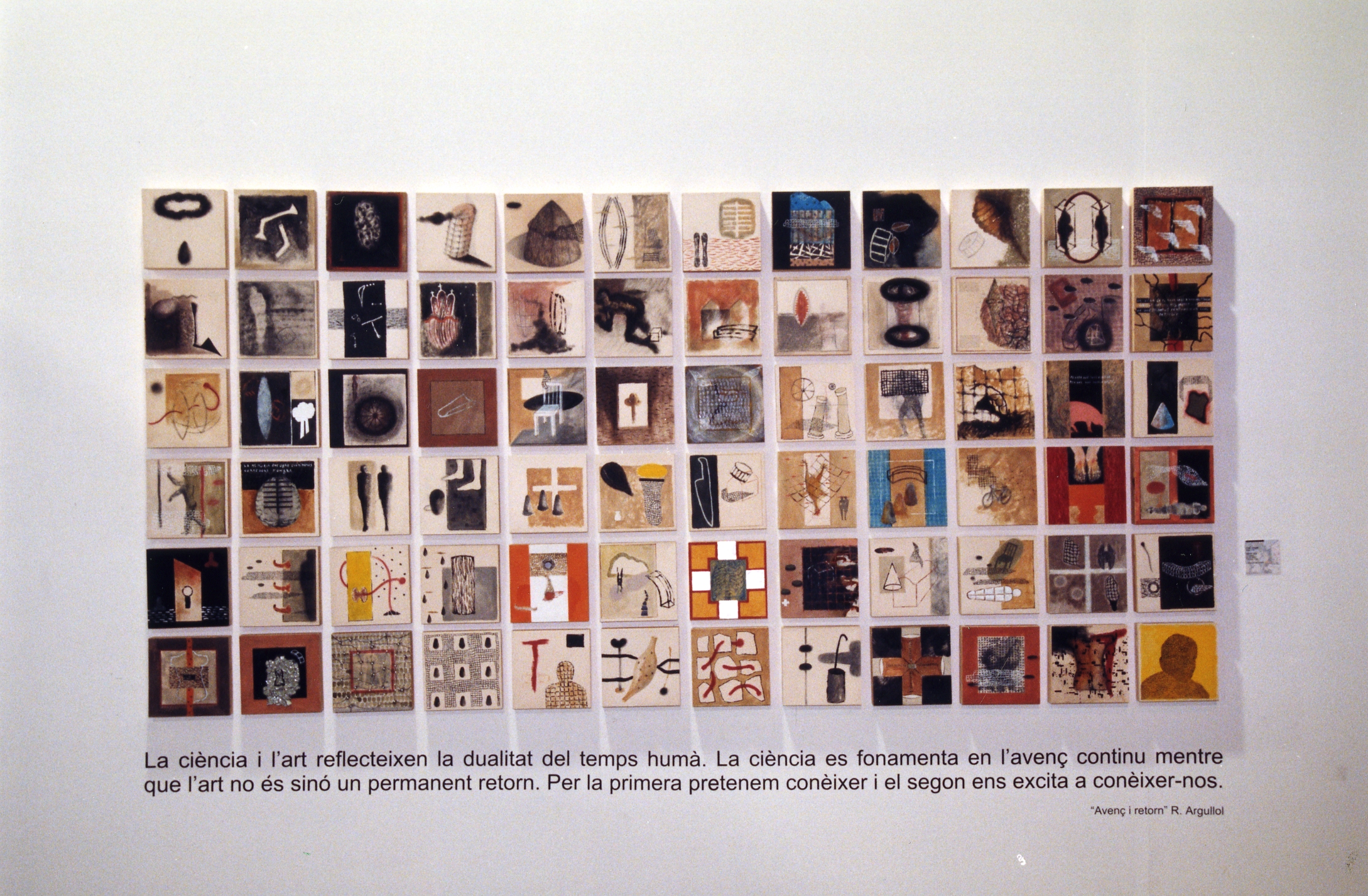